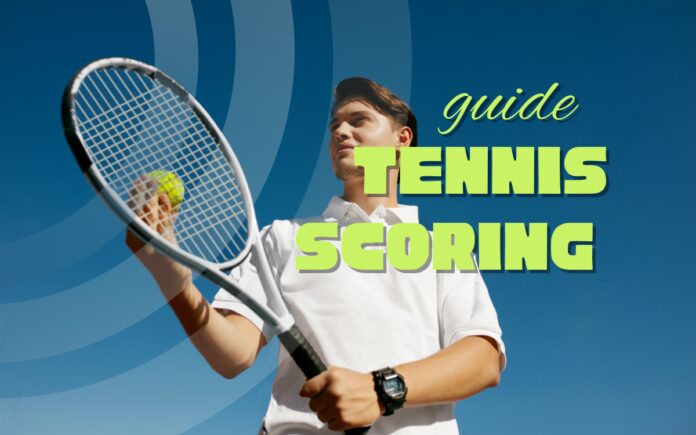 If you’re new to the game of Tennis, you’d probably agree that the scoring system is rather confusing.

Tennis has a unique scoring system that differs from other sports. Below is a simple guide on how tennis scoring works.

How Does Tennis Scoring Work? 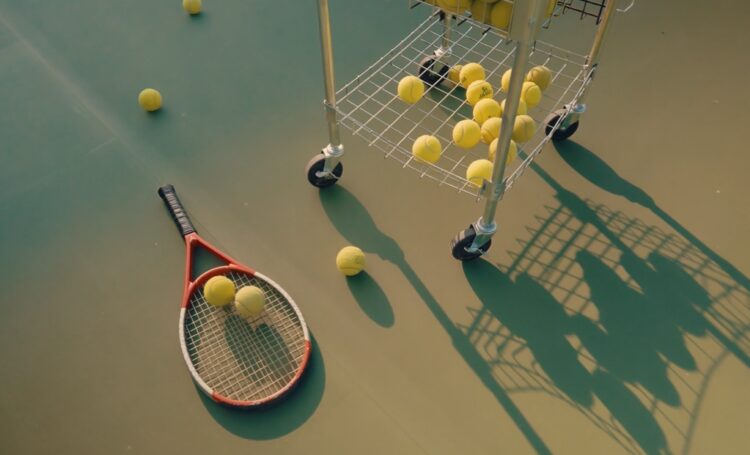 Tennis scoring is comprised of points, games, sets, and matches, in that order. For example, winning six games makes one set, while three sets make a match.

Points win you games, games win you sets, while sets win you matches. However, there are some exceptions to these rules, such as tiebreakers, having to win by two points, the length of your match, and the type of set you play.

The match begins via a coin flip; the winner of the toss decides:

When a player picks a courtside, he/ she forfeits the first serve to the opponent. The first player to serve will continue serving until the game ends. In the next game, the opponent takes over the serving duties until it ends.

How to Score a Tennis Game 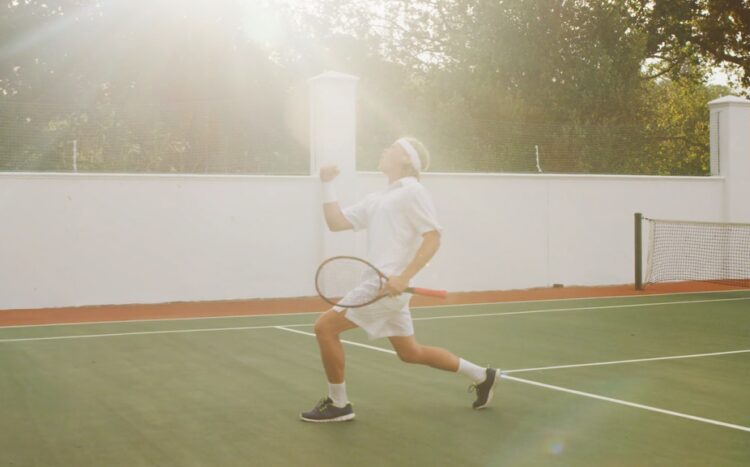 Each game begins at love, meaning 0-0. One point scored brings a player to 15, two points to 30, and three to 40, the next point would win the game. Unless the opponent levels the score at 40-40 (otherwise known as Deuce).

The umpire announces the current point score, starting with the server’s scores. If the referee is absent, the server reports the scores before serving. If the server had won the previous two points, you’d hear, “30-love.”

Two tries accompany each serve. A successful serve occurs if the ball crosses the net and bounces in the opponent’s service box.

If the ball doesn’t land in the opponent’s service box, the service becomes a fault and you’d then take your second serve. If a fault occurs on the second attempt, you lose a point to your opponent.

The same applies if the serve hits the net cord, known as ‘let’. In this situation, the shot is a fault. A let occurs when the serve strikes the net or hits the top of the net and bounces over.

The scores become deuce if both players score 40 (40-all). The players then enter into an advantage phase to break the tie.

An Ad-in occurs when the server wins a tie point. If he/ she loses, it becomes an Ad-out.

Whoever wins two consecutive deuce points wins the game. The score returns to deuce if two players each score one point at deuce. The game proceeds until either of the players wins two points in a row.

Serving duties alternate between players after each game. Players switch sides after every odd number of games. After the 1st, 3rd, and 5th game.

You win a set by winning six games. However, you have to win two more games than your opponent.

If you lead your opponent 6-5, you have to win a seventh game to claim the set. If the score is at 6-6, the set enters into a tiebreaker.

Two sets out of three guarantee you a win in a tennis match. If each player wins a set, they must play a deciding set to determine the match-winner. Possible winning sets can be 2-0 or 2-1.

A few tennis tournaments opt for best-of-five sets. In such tournaments, you have to win at least three sets to emerge the winner. Possible winning scores are 3-0, 3-1, or 3-2. Tournaments that adopt this option are traditionally men’s Grand Slam matches.

How are Points Scored? 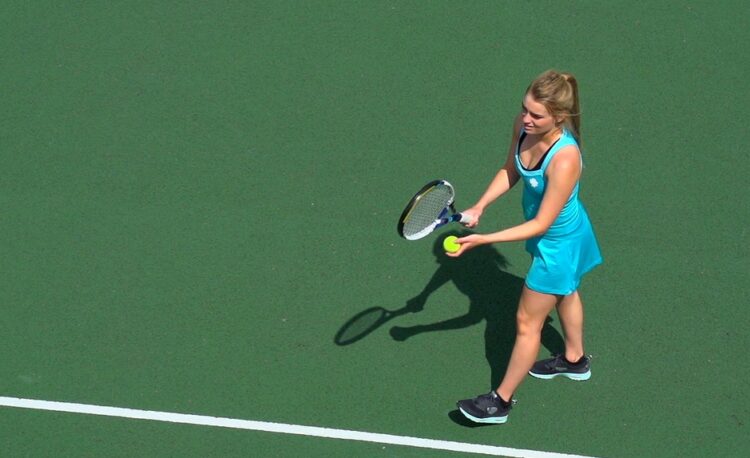 Points are the elementary units of a tennis match. You score a point when the opponent fails to return your shot. However, there are other ways of claiming a point, such as:

A double fault occurs when the server makes two consecutive fault serves. You gain a point whenever your opponent makes two mistakes when serving.

When the ball bounces twice on your opponent’s side of the court, you score a point. Although the first bounce must be within the playing surface, which differs depending on whether you’re playing a doubles or singles match.

An ace is an unreturned serve. You earn a point whenever an opponent fails to return a serve that lands within the service box.

A double bounce is when the ball bounces twice on one side of the net. As long as the first bounce is considered in play. The opposing player would then score a point. 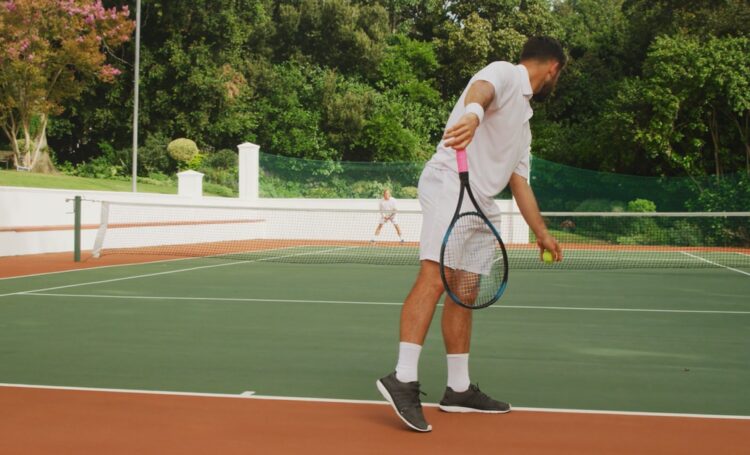 A forced error occurs when you force your opponent to make an error. Likely, your shot was too good which couldn’t be returned, despite making contact on the ball with their racket.

Unforced errors are missed shots taken by the play who’s making the shot. A double fault is the most common example of an unforced error.

Unlike other sports, tennis does not use 1, 2, 3 when counting points. Instead, scores start at love and end at 40. Here’s how the scoring system works.

The origin of this scoring system is unclear. Some sources claim it originated from clock faces used to monitor scores. A quarter move of the clock’s minute hand reflects a score of 15, 30, and 45. When the arrow pointed at 60, the game was over.

You can score a set in two ways, either using the advantage set or the tiebreak set. The umpire has to announce which set will be adopted before the game commences.

In this set, you need to win six games by a margin of two games. Whenever there is a tie, the set continues until one of the players/teams wins by two games. You won’t encounter a tiebreak.

If you ever watch Wimbledon, you will notice there is no tiebreaker in the final and deciding set. You have to win by two. In the past, these final sets have lasted hours before someone won by two. The longest tennis match in history happened on June 24, 2010. John Isner beat Nicholas Mahut 70-68 in the final set, which lasted 11 hours and 15 minutes.

Because of that match, Wimbledon put a cap on the final set. If a deciding set goes to a 12-12 tie, that set will go to a tiebreaker like the other sets. Other major championships have adopted their own similar rules to prevent the final set from lasting too long.

A tiebreak is a unique set that breaks a six-all tie. If you are first to reach 7 points, you win the tie and subsequently the set.

The tiebreak commences with a serve from the player who received last in the 6-6 score.

The players/teams then alternate after the third point. Each serves two points into the ad court.

Players swap ends after playing six points. You have to change ends even if you’re playing your two points.

If the tiebreak proceeds to another six points, players have to swap ends again. The same scenario occurs after every six points until the tiebreak ends.

The tiebreak ends if one player accumulates 7 points. The first tennis player to get seven points is the winner of the game and set.

If the tiebreak score is six, the winner becomes the first player to get two consecutive points. The scores can be as high as 20-18.

The exact scores of a tiebreak are insignificant. The umpire will always report the scores as 7-6 to the winner. It could end at 7-0, but the report will read 7-6.

Serving After a Tiebreaker

After the tiebreak, the point system reverts to standard. When it comes to serving, the umpire will treat a tiebreak as a single game. Tennis rules don’t permit players to serve in consecutive games.

The receiver at the start of the tiebreak becomes the server in the next game. Players/teams must also switch ends before the next set commences.

Below, we answer some of the most common questions that those who are new to the game ask before playing or watching tennis.

A Deuce occurs when both players in a tennis game are level with three points each. It represents a 40-40 score.  When the score is 3-all, you need to win two successive points to claim a game.

When Should You Switch Ends in Tennis?

You swap ends after every odd game in tennis. This means changing court sides after the first game, the third, the fifth, and so on. Changing ends during a tiebreak is different. Switching sides after every six points.

A 40-40 score is called Deuce. It occurs when there is a tie of three points between two players or teams.

Why Do They Call It Love in Tennis?

Love depicts a zero score in tennis. Some tennis enthusiasts believe the term comes from the French word “l’oeuf,” which means egg. An egg resembles the number zero. Others believe it comes from the phrase “playing for love.” This phrase refers to playing without wagering.

What Does Ace Mean in Tennis?

An ace is a legal service that isn’t returned by your opponent. Each time you hit an ace, you gain a single point.