Everyone knows how important physical activity is as part of a healthy lifestyle. Healthcare professionals are constantly raising awareness of how important it is for people to take part in sports, but you may be surprised to know that not every sport has the same benefits to your overall health.

Several studies into the correlation of sports and life expectancy have found that tennis is associated with an increased life expectancy, including the graph sourced from comparethemarket below, when compared to both the general population and players of other sports.

This research found that tennis players can have as many as ten years added to their life simply by playing this sport. 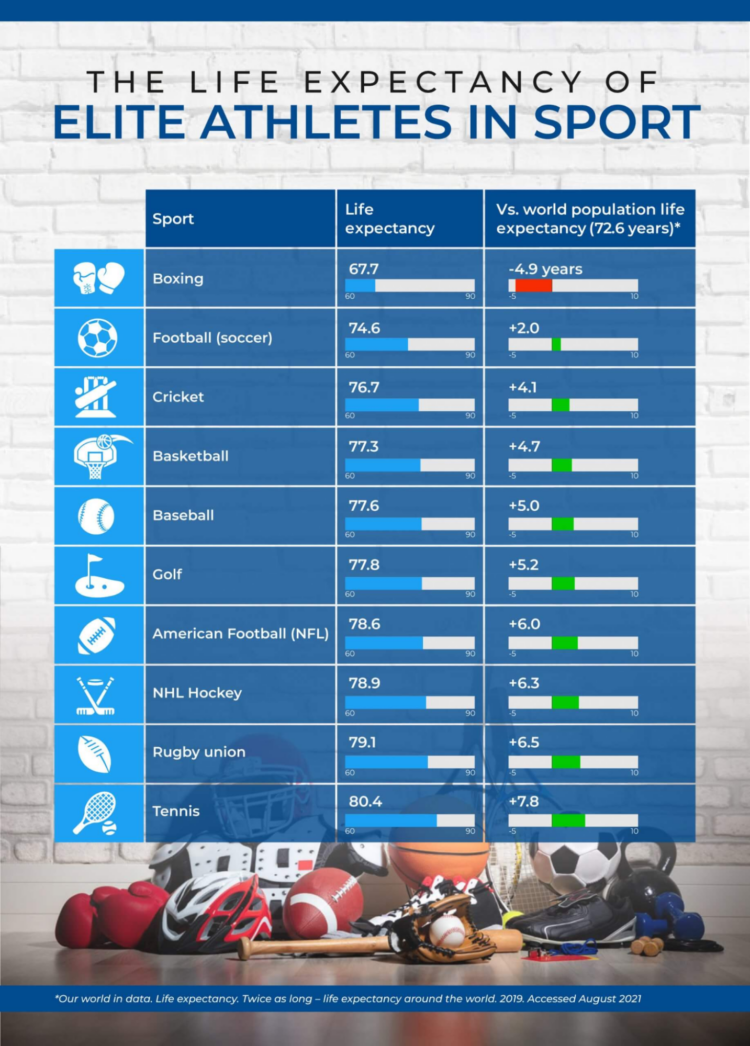 Practicing sports, in general, contributes to a healthy lifestyle. However, playing tennis is one of the best sports to practice as players incur significantly less injuries than those in other areas. As with every sport, whenever the player is not cautious and takes the appropriate steps they may suffer from injuries.

There are specific injuries that are associated with tennis, such as the common tennis elbow and Achilles tendon issues, as these are parts of the body that are overused in this sport. However, these injuries can be prevented by using appropriate supportive pads and footwear, as well as with effective stretching before and after each match.

The fact that there are not many injuries associated with this sport is a reason why it is suitable and popular among older players, as they are constantly in motion and working on their balance.

They Look After Their Physical Health

It’s no secret that those who play sports are more likely to have better physical health, as exercise, in general, contributes to improved overall health. If an individual wants to succeed at tennis, they must go to the doctor occasionally and get frequent medical checks to ensure all is well with their health.

Athletes go through rigorous training, which has a significant impact on their bodies. Our bodies are designed to recover from extreme physical activity, but this requires time that tennis professionals do not always have.

This is why players have a team of physicians with access to the latest treatments, therapies and technology that ensure their health and performance levels are maintained. This need to use healthcare services means that tennis players must have appropriate health insurance in place.

Sports are not only good for an individual’s physical health, but also for their emotional wellbeing. People tend to neglect the importance of mental health when it comes to overall health, but this is just as important (if not more!).

Firstly, tennis is often played outdoors, which is a contributing factor to improved emotional wellbeing in itself. If you have ever watched a tennis match, you will also have noticed that the audience is usually calm and quietly supportive of the players, making for the perfect atmosphere in a sports environment. This will certainly not be the case within audiences for a football match or even an MMA event.

It Can Stimulate Brain Development

The brain is a vital organ that must remain stimulated as we age. A lack of brain activity can result in the development of a range of health issues and cognitive decline. Exercise is often associated with physical prowess mainly because the brain isn’t often considered when thinking about physical activity, but this aspect remains vital.

Most sports do require individuals to be physically healthy and have great stamina levels as they mostly use their bodies. On the other hand, tennis is one of the few sports that demands players to use parts of their brain as well. Tennis is an eye-hand sport, which requires precise coordination and it connects the brain to what you are doing.

You will need to remain focused if you want to see the ball coming and you must think quickly to react to where the ball is going so that you can hit it. This results in the brain being engaged and stimulated, which may be a reason as to why players of this sport have high life expectancy.

Better Than Other Sports

Any physical activity is better than none. But considering that studies have suggested tennis players actually live considerably longer than the general population, including those who practice other sports, one must acknowledge that there may be certain characteristics of this sport that result in such an increase in expectancy.

Tennis is a sport of intervals – this essentially means that you go very fast and then rest intermittently throughout the entire match. This type of exercise has been considered the best to stay fit. It is certainly better than running long, slow miles.

Tennis gives people the perfect combination for a positive lifestyle – players need to adopt a healthy and balanced diet, they maintain good levels of physical activity and their stress remains in check as a result of the calm atmosphere and low levels of pressure from playing tennis.

Tennis is considered a social game – you play with other people and you can either play one on one against an opponent or in pairs. This means that there is social interaction during the game as well as before and after.

You may think that this applies to every single sport as you are usually around others and in teams, but just because you are surrounded by people does not necessarily mean that you are not isolated.

In addition to this, some sports are associated with incredibly high levels of stress and pressure (like football, for example); to an outsider, it may look easy to run around a football and score goals, but football players receive a lot of pressure from the public to win and make their team and fans proud.

This is not something tennis players often have to worry about. If you are thinking about starting a sport, you should certainly consider tennis, given that it is associated with higher life expectancy and has a number of benefits to both your physical and mental wellbeing.