All the tennis fans barely waited for the Australian Open to start. However, who would say that things are going to be turbulent like this year? We are not going to talk about the details or support one or the other side. The fact is – the best player in the world and the nine-time winner of the Australian Open is not playing this year.

Novak Djokovic would probably be the first favorite to win the huge tournament that has a long tradition. But, because of the pandemic and other stuff that were pretty viral in the last couple of weeks, he can’t play. If some of the players from the list below win the tournament, Djokovic could lose the first place that he has been holding for a long period of time.

The tournament is extremely important for some other players. For example, Nadal is chasing his 21st Grand Slam title which would automatically separate him from his two main opponents – Djokovic and Federer. However, believe it or not, according to different bookmakers, he is not the main favorite to win the title.

Instead of that, bigger chances are given to some other players. Because of that, we would like to make a list and show who is the first favorite to win the Australian Open in 2023. We are sure that most of you are not going to be surprised when reading the remaining part of the article. Let’s go!

When the first player on the ATP list is not playing, then, logically, the second player is the favorite. Daniil Medvedev (by the way, a very good friend of Novak Djokovic) has the biggest chance to win this year’s Australian Open.

As with any other Grand Slam, this one is a huge motivation for every tennis player that plans to become number 1 one day. However, this time, Medvedev has one more reason to give 100% of his strength for every game.

Believe it or not, after a long period, Medvedev could reach first place on the ATP list. In the fourth round of the tournament, he had a serious problem with Cressy. 3 out of 4 sets during the game were ended up with a tie break.

Some people even started to believe that he could, potentially, lose the game, after the third set. However, it seems that he managed to recharge his batteries and win the match in the fourth set.

In the quarterfinals, his opponent is a relatively good Auger-Aliassime. But, it is important to mention that Medvedev is also the favorite in that game. We will see if he will manage to reach the finals and potentially face some other favorites from this list.

The Spanish tennis player is also motivated to reach the title this year. Despite the fact he is playing one of the biggest tournaments in the tennis world, he is also chasing his 21st Grand Slam title which would automatically push him a step closer to becoming the player with the most titles of this type in the history of tennis.

Indeed, Nadal is 35, but that doesn’t stop him from becoming a Grand Slam winner once again. But, we also need to mention that he hasn\t reached the Australian Open finals since 2009 which is a surprising fact.

Despite that, it is also not a secret that Nadal is not in the best of shape, but he finally managed to recover from all the injury problems that he had in the past. We will see if he is going to meet the expectations of his fans from all over the world.

So far, Tsitsipas is playing pretty well. He had a small problem of winning Fritz, the American tennis player. However, it seems that Sinner was not a big problem as he managed to win him in three sets for a relatively short period.

That puts him in third place on this list. Tsitsipas is waiting for the end of the match between Auger-Aliassime and Medvedev as the winner of this match is going to be his opponent in the semi-finals.

In other words, two out of three main favorites will potentially meet next week. Some people say that the winner of that match is going to win the title, but we are yet to see how things are going to change in the next couple of days.

Well, while we are writing this article, Zverev has already ended up his journey on the Australian Open. No one expected that he will easily lose a match in Round 4 against Shapovalov. We do not want to say that Shapovalov is not a good player. As the matter of fact, he won that match easily in three sets.

But, according to bookmakers, he was even the second favorite to win this tournament before the entire event even started. Because of that, he will still have to wait to win his first-ever Grand Slam title.

So, Should I Bet?

Generally speaking, this article CAN help you make certain predictions. However, the “Zverev case” and his early finish is actually a good message. Australian Open is a huge tournament, and everyone is highly motivated to reach the finals and potentially fight for the title.

All the players from the list have a special motive. That motive especially became stronger when the main favorite of all (read: Novak Djokovic) was not able to play the tournament. Because of that, we suggest you analyze the remaining games of each player and try to predict who has the biggest chances of reaching the goal.

Of course, sports betting is not the only way to have fun. People can also try out some other casino games and watch the tournament only as a supporter. Because of that, you may want to click here and test your luck with slots or any other casino game supported by some of the best gaming software in the world. Doesn’t this seem like a better idea in case you are not too familiar with tennis? 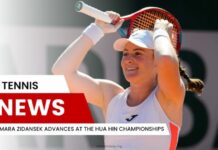