Home Players What Are the Odds for Medvedev to Be the 2023 Year-end No.1?

Tennis is so popular that both tennis fans and bettors who specialize in other sports bet on it because they find it easy to predict. Bookmakers offer a wide range of lines and good odds, encouraging their customers to bet on tennis sporting events. And they spur them on with other gifts. Bonus for the first bet is one of these gifts that you can get, for example, at 22bet.com.gh/line/.

Today we will talk about the event, which, probably, will change the whole idea of men’s tennis!

The U.S. Open final in which Daniil Medvedev defeated Novak Djokovic may have been a turning point in the history of men’s tennis. The most successful player of our time, for the second time in a row, could do nothing when he needed to win by blood on his nose. After all, the Serb probably will not have a second chance to win a season-long “Slam”. Nor, it seems, will he have an option to take the Olympic title, which Djokovic gave to Alexander Zverev six weeks ago. That’s not to say Novak has to be scrapped, but his time is coming to an end. So are the stars of the 2010s, Roger Federer and Rafael Nadal. The old Big Three are being replaced by a new trio of charismatic tennis players.

Medvedev, Zverev, Tsitsipas – this is the company that will set the tone in men’s tennis in the near future. The Russian is the first player to win the Grand Slam title. Daniel is only the second player who was not a member of the old Big Three to win the trophy at the majors in the last five years. The first was Dominik Thiem, but the Austrian is now 28, riddled with injuries, and unlikely to join the Djokovic – Federer – Nadal succession for the foreseeable future.

Of course, something nasty could happen to someone in the new trio, too. Zverev has been plagued with accusations of abusive behavior by his ex-girlfriend, Tsitsipas has been touched up because of “toilet breaks.” But the old guard was not without fault either.

In February, after Medvedev’s loss to Djokovic in the Australian Open final, many predicted Daniel’s first Grand Slam title. Many people actually guessed that Russia’s best player would win the US Open title. Medvedev had a poor showing on clay and grass courts this season. He did win a small tournament in Majorca, but that’s hardly a turning point.

The 25-year-old Russian has traditionally recuperated his best form for the U.S. Hard Series. And he has played with such confidence that even the world number one, going for a record 21st major title, cannot challenge him now.

Only Dreams of Peace

Can Daniel now take the next step and become an ATP ranking leader himself? Alas, this season it is almost unrealistic unless Novak Djokovic suddenly stops playing for the rest of the year out of grief.

Both men’s tennis leaders have already guaranteed themselves a trip to the year-end tournament. But if Daniil wants to create a springboard to attack the top line for next year, he does not have the option to rest this fall.

In October it is desirable for the first racketeer in Russia to play in Indian Wells, Moscow, and St. Petersburg. In November he will play at the Paris Masters and will be able to play for the final championship. And this is despite the fact that Medvedev has played 15 tournaments and 57 matches this year.

Two years ago a similar race led to the fact that Daniil ended up in a functional and psychological hole. Of course, now the Russian and his coach are more experienced and will try to distribute their forces correctly, but it will be incredibly difficult. On the other hand, Medvedev is now the leader in the ATP Tour, and it’s silly to slow down while the game is going on.

It is clear that if Daniel wants to contend for the top spot in the rankings next season, his brilliant hard-court play will not be enough. During the off-season, he must improve his game on the clay. Of course, it will be difficult to reach the level of Tsitsipas, who is predicted to be the new king of the courts, right away.

However, if Medvedev is able to play a better crust season than Djokovic in 2023, by Wimbledon he may be ready to attack the number one ranking. Or by the US Open 2023 if he reaches the semifinals at the London TBS. In any case, Daniel’s enthronement on the scale of the whole men’s tennis is still a long way off, but the ambitious dream is achievable. And now it does not seem so distant and unrealistic.

According to experts, he plays amazing, spectacular, and interesting tennis. He’s definitely one of the best players on hard courts in recent years.

That’s 100%. And it’s not only up to him, when can we expect Medvedev to become the number one ranked player in the world but also Novak’s results. If he wins Grand Slam tournaments, it’s inevitable.

At the US Open, he’s made a big push to be number one. Whoever wins more gets first. So far, Djokovic is ahead by a wide margin.

Also, experts say that there is room for Medvedev to grow. Mostly in terms of psychology. When he is calm, not annoyed by anything, concentrated on the game, and has a positive and combative attitude, then the results come. When he gets emotional, he plays worse.

Another thing is that Djokovic is a stable player on the mainland, while Medvedev is not yet. If you add stability on the ground, Medvedev will have a better chance to be number one and hold that position. 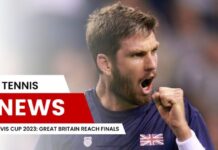 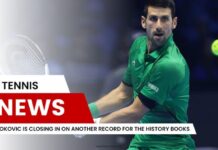