Are you looking to install a Tennis court or are simply curious about the size of a Tennis court’s dimensions? We’ve provided all the official sizes for each area of the court.

Let’s look at the standard Tennis court dimensions, including the length, width, and surface area for both singles and doubles courts.

The overall length of a professional regulation size Tennis court is 78 feet or 23.77 meters or 26 yards.

The same rules apply to the width of a Tennis court. Regulation Tennis courts have specific guidelines. The typical width is approximately 36 feet or 10.97 meters. In yards, that’s about 12.

The width of court players’ use for recreational purposes may vary. Although there is one official length for professional tennis courts, the width differs between both singles and doubles courts.

Singles matches are played on a singles court which is 78 feet in length and 27 feet wide. The width is what differs from singles and doubles matches, with ‘doubles alley’ being outside the playing area in singles matches.

Doubles matches are played on a doubles court which is 78 feet in length, the same as a singles court. However, the width is what differs in a doubles game, with a total width of 36 feet. This is because the doubles alleys on either side of the Tennis court are now considered in play.

Doubles sidelines are an additional 4.5ft away from the singles sidelines on either side of the court. That’s an extra 9ft of playing space during doubles matches. This area is known as doubles alley (see right).

3. Areas of a Tennis Court

The backcourt or ‘no man’s land is a Tennis court’s largest box. The dimensions of the backcourt are 18 feet in length or 5.5 meters and 27 feet or 8.2 meters in width. 486 square feet or 45.2 square meters make up the total area.

The doubles alley is made up of boxes that distinguish a doubles match from a singles match. As a shot is only considered ‘in play’ in this area during a doubles match. They are the long rectangular boxes that run downside of each side of the Tennis court.

4. Lines of a Tennis Court

Although the lines on a Tennis court are used to separate different playing areas. They also each serve a purpose and have their own name. They include; the baseline, service line, center service line, singles sidelines, doubles sidelines, and center mark.

These lines also have a standard thickness. With a minimum width of 2 inches and the baseline being up to 4 inches in width.

The baseline can be found at the end of each side of the court and is where you’ll see players serving from. Each baseline is 36 feet in length on standard courts.

On each baseline is a center mark. It sits at the midway point and designates what side of the court a player must serve from. Players serve across the court diagonally into the opposite service court.

The service line runs parallel with the baseline, sits 21 feet from the net, and is 27 feet in length.

The singles sidelines designate the side of the court in a singles match and are 78feet in length. When a player serves or hits a ball and it lands outside these lines, the ball is considered ‘out of bounds.

If you’re unfamiliar with the dimensions of a tennis court, all of the official dimensions and requirements can be overwhelming. It takes a bit of studying and time. There are recommendations and minimum requirements for international and recreational courts. You can consult ATP and ITF resources for these dimensions.

How Much Space do you Need for a Tennis Court?

How Wide is the Lines on a Tennis Court?

The lines of a Tennis court should be a minimum of two inches in width. Whereas the Baselines can be up to four inches wide.

How High is an Indoor Tennis Court?

Are all Tennis Courts the Same Size?

Official Professional and tournament regulation Tennis courts are the same sizes. There may be slight differences in areas around the marked court which can vary between venue locations.

There are also variations in size for recreational or junior courts. These can be smaller than standard tennis court dimensions, especially if a location does not have sufficient room for a standard size court.

What is the Total Area of a Tennis Court? 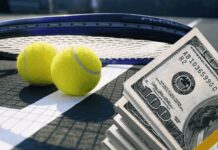 How to Bet on Tennis: 5 Tips and Strategies to Stay “A Cut Above”