Rafael Nadal and Serena Williams don’t just execute tennis forehands, they assault tennis balls with precision and consistency. Their combative nature demonstrates a sense of dominance, which typically commands the court and gradually deflates the competition.

Watch as they rip a stunning tennis forehand cross-court or scorch a mind-boggling shot down the line. This impressive athleticism is exhilarating to watch and this is what motivates tennis athletes to maximize their potential in the game of tennis.

Understanding the dynamics of a tennis forehand is rather simple, but this is a technique that should first be clarified for the newbie to the game of tennis.

With that said, a tennis forehand is a groundstroke that is executed as the tennis ball is played to the side of your body where you most comfortably hold your tennis racquet.

The Significance Of The Tennis Forehand

Did you know that the majority of shots executed in a tennis match are forehands? Do you think that is significant to the development of a tennis player’s game?

As you progress on your journey in the game of tennis, you will be executing numerous forehands and if practiced frequently, this shot can become a powerful weapon that can dominate your opponents and elevate your game.

So yes, well executed tennis forehands are significant and vital to your advancement in the game of tennis.

Imagine for a moment shaking hands with another person. Now with that concept in mind, shake hands with your racket. Hold your tennis racquet in a vertical position where one edge of the racquet is pointing to the court. Now place and wrap your fingers around the grip near the butt of the racquet.

If you are right-handed, grip the racquet out to the right side of your body with your palm barely behind the handle. Place your wrist slightly to the right of the butt of the handle while the space between the thumb and index finger should be above but somewhat towards the rear of the handle.

If you are left-handed, grip the racquet out to the left side of your body with your palm barely behind the handle. Place your wrist slightly to the left of the butt of the handle while the space between the thumb and index finger should be above but somewhat towards the rear of the handle.

This is known as the eastern forehand grip. Tennis players can hit with any of the common grips (eastern, western and continental), but the eastern grip is the most common utilized by beginners to hit solid tennis forehands, as it is the most natural and versatile of the three grips.

The Tennis Forehand In A Nut-Shell

Lets move on. As the tennis ball is played and bounces on the forehand side, initiate a backswing by guiding the racquet behind you in a modest up-then-down loop or in a vertical line that is parallel to the court. The racquet should be in a position that is slightly lower than the waist, yet it is pointing to the fence to the rear of the baseline.

Keep this in mind though. Pay attention to how far back you swing the racquet. Chances are the backswing is too far back if the racquet head is seen rotating behind your body by a player position on the other side of the court.

However, if you wait in anticipation and hesitate to position your racquet until after the ball bounces, chances are you will not have enough time to adjust to the bounce, rotation and pace of the tennis ball.

With that said, ensure that the racquet is already back and in position as you prepare to follow through with the tennis forehand technique.

Leaning forward and transferring your weight into the shot is one of the most important steps involved in the forehand technique. If this step is neglected, the power acceleration will only be produced by arm strength instead of the total weight in your body.

Power transferred by just arm strength will result in weaker strokes and arm fatigue at some point during practice or in a tournament.

Simultaneously as you transfer your body weight forward, your racquet momentum should accelerate parallel to the court or rotate in a moderately upward trajectory throughout the forward motion of the swing. These two maneuvers ads topspin on the tennis ball resulting in more dependable shots as the tennis ball tends to bounce higher on the other side of the tennis court.

Connect with the tennis ball prior to it reaching a spot that is level with the midsection of your body. The more you accomplish this, the better. Practice this regularly and you will be please with the results.

Steady your wrist in a solid stance that results in a bend with the upper part of your forearm. Maintain a solid stance and prevent wrist movement as you follow through with the swing. Stretch out your arm with comfort, but not totally straight as you initiate the motion of the swing.

Strive to “rotate and carry” the tennis ball on the racquet strings as you follow through with the stroke. Control the racquet with a solid grip so it does not wiggle around as you connect, but not so firm that your sense of touch for your tennis racquet is diminished.

Strike then follow the tennis ball in a smooth motion with your tennis racquet. As part of the follow through, strive to extend your reach out toward the net. Continue the motion and rotate your racquet across the front of your body finishing high in the direction of the shot.

Proper execution of the tennis forehand will gradually become a habit over time and you will progress where the entire rotation in the swing mirrors itself every time you perform this skill.

If the tennis ball lands below your waist, maintain great posture. Then simultaneously and in a fluid motion bend your knees while keeping your back straight utilizing the same tennis forehand rotation to perform this skill. 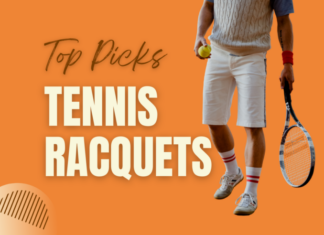