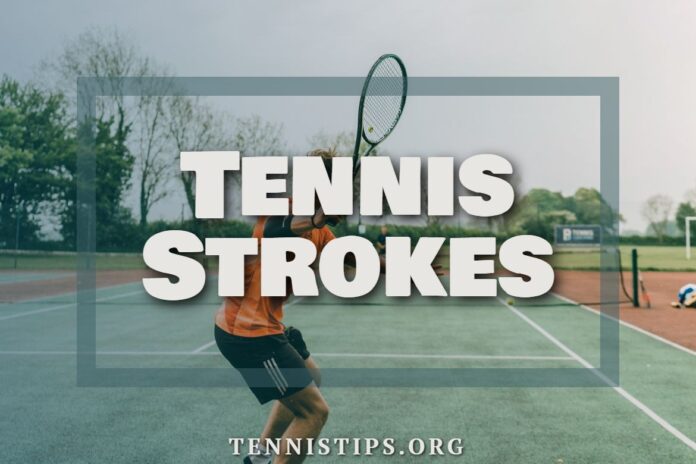 Tennis, although very popular, is also an extremely difficult sport to learn, play, and master. Stepping onto the court and starting playing with no prior training involved isn’t something you can do and expect to win. There is a variety of rules to learn about how this sport is played, and it takes a lot of time to do so.

No matter if you want to learn more about tennis because you’re planning to start playing it competitively or you simply want to do it for fun, you should make sure the information you gather is correct and that you’re fully acquainted with how this sport is supposed to be played.

To save you from the hassle of looking for this info on your own and spending an eternity performing research, we’re here to provide you with the essential info you need! This will include crucial details about different tennis strokes, such as how they are performed, when they are performed, and also who some of the most famous players performing them are.

If you are interested in discovering what types of tennis strokes exist and how they are performed, you are in the right place! We’re here to explain everything there is to know about each tennis stroke in great detail. 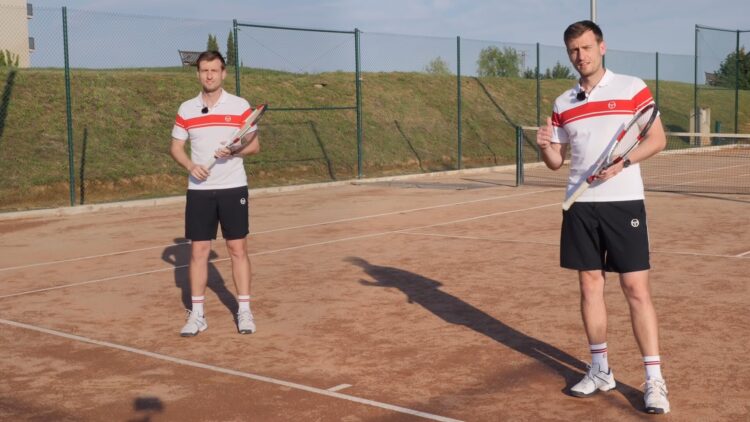 If you’re a fan of tennis and watch it often, you’re already aware that tennis players use a ton of different strokes depending on the occasion, opponent, circumstances, and many other factors. When performed correctly, some of these strokes can help a player win, but they can also be a player’s biggest downfall. In case you are not familiar with this and you’re here to learn all there is about tennis strokes from scratch, buckle up and start reading!

We are going to list the 6 most commonly used and fundamental ones so that you can get a better understanding of what they are and how they work. Take a look at the list below for all the info:

The first stroke we’re going to cover is the service, also known as service. This stroke is used to initiate a point, and each and every point begin with a serve. The way this stroke is performed is by a player throwing the ball in the air and hitting it with a racquet. The ball should be thrown into the diagonally opposite service box, and it should not be stopped by the net. It can touch the net on the way back, but it will only be rendered good if it falls on the opposite side.

The serve time is also the only time when a player has room to think about the stroke and prepare himself or herself for it, unlike other strokes when one must be prepared to react quickly and efficiently on the spot. As for how the player should stand when performing the serve, you should position your body sideways and have the front foot at approximately a 45-degree angle, as well as pointing towards the net post.

Mastering the serve is considered one of the most difficult strokes to master, but it is also extremely useful and beneficial in the long run. Taking the time to truly perfect this stroke can help you immensely and give you an incredible advantage in future tennis matches.

We’ll continue with one of the best-known and most natural strokes—the forehand stroke. Many people argue that the forehand is the easiest stroke to learn and that it is much less difficult to achieve than any other tennis stroke. Although learning and mastering this stroke is somewhat easier to accomplish than the previously-mentioned one, it is by no means considered a piece of cake.

Tennis is a sport that requires a lot of practice and dedication, like any other, so learning any stroke will certainly take a bit of time and effort. With that being said, learning how to perform the forehand might take less time than the others since it is the most natural for the majority of players.

This stroke is performed after the ball hits the ground once and bounces. It is usually performed by the player swinging the racket across his or her body with their hand moving palm-first.

The player swings and hits the ball in the direction where he or she wants it to land. The most important factor to consider here is positioning. You don’t want to hit the ball when it’s too far away from you and not within reach. The best way to go about this is to go for the hit when the ball is comfortably within reach and you don’t have to fully extend your arm to hit it.

The next one on our list is the backhand, and you can go for either a one-handed or two-handed backhand. One-handed backhands might be better suited for managing the shots that come into the body than the two-handed ones, and they are also there to provide you with a longer reach.

Two-handed backhands, however, give you more control and stability. Many players prefer two-handed ones since they can be easier to perform and give better results, but there are also certain players who are more experienced and find one-handed ones more manageable. This essentially comes down to a personal preference and what works better for the player.

This stroke is achieved by a player swinging the racquet around his or her body with the back of their hand preceding the palm. It’s typically performed from the baseline. When it comes to right-handed players, a backhand stroke will begin with the racquet on the left side of his or her body and continue across it to make contact with the ball.

It should end on the right side of the player’s body, with the racquet over his or her right shoulder. This stroke is considered harder to master and perform than the forehand, and it has proven to lack the power and consistency that the forehand has as well.

Let’s continue with the lob—a stroke typically hit when the opponent is standing in the close vicinity of the net and waiting to volley. This stroke is mostly used as a defensive technique and can be used to a player’s advantage greatly if performed correctly.

If you want to perform a defensive lob, you will have to do it when the opponent retreats to the baseline. If a player is out of court, performing this defensive lob can easily buy you enough time to run back and find a better defensive position.

When performing the lob, the ball should be passed over the opponent and straight into the open court behind. A player typically hits the ball at an angle between 0 degrees and 45 degrees when performing this stroke.

This stroke comes with certain risks, but if executed perfectly, it can win you the point outright. Performing it might be a gamble, but it can also help you win and be one of your greatest advantages. Wondering which famous tennis players have adopted and used this stroke successfully? Some of the players who have developed exquisite lobs over time include Andre Agassi, Michael Chang, and Andy Murray.

In case a lob is not been hit high or deep enough by the opponent, the overhead comes into play. Overheads are usually hit near the net or, sometimes, in mid-court prior to the ball bouncing. It’s also possible for a player to perform an overhead from the baseline, typically on the bounce, but this mostly results in a less powerful stroke.

A player can also perform both a forehand and a backhand overhead (smash). With that being said, note that the backhand overheads are a lot more difficult to accomplish, especially for beginners.

That is why forehand overheads are a lot more common and frequently seen on the court. Two of the players who are well-known for their outstanding backhand smashes are Rod Laver and Jimmy Connors. They are both left-handed as well. Curious about the most famous forehand smash? The first person to introduce it was Helene Rice. She was the first player to perform it in 1890.

The second to last stroke we will mention in this list is a stroke widely known as a drop shot. If a player hits the ball relatively softly and the ball lands just over and close to the net on the opponent’s side, it is considered a drop shot. The drop shot is also known as a touch shot, considering the lack of power used to perform it.

The drop shot is also considered a more advanced shot that certain players perform when their opponents are at the baseline. Accomplishing a drop shot is considered difficult since it often requires the element of surprise, but that’s not all. Having superior control over the ball is also necessary to perform this stroke.

Wondering when the best time to perform this stroke would be? If a player is in a rally with his or her opponent and he or she finds them a little off-balance after hitting one of the shots, it’s the perfect time for a drop shot. Using as little power as possible to get the ball over the net, make sure to get the ball just over it, ideally a few feet away from the net. That way, the opponent won’t have enough time to run forward and put the ball back into play.

The last one on our list of tennis strokes is the volley—a stroke that is achieved by hitting the ball before it bounces on the ground. A player usually performs this stroke while standing near the net, but this is not the only way to go about it. Volley can be achieved while standing farther back, in the middle of the court, and even near the baseline. The rules surrounding this stroke are that the player must use an overhead motion and hit the ball before it bounces.

We can differentiate between several types of volley, which include a regular volley, a swing volley, a drop volley, and a drive volley. A regular volley stroke consists of a short backswing and a punching stroke. If a player takes a longer backswing to put more force on the ball, we call it a swing volley. In case a player touches the ball lightly and it falls just after the net, we call it a drop volley. As for the drive volley, it is achieved when the player hits the ball with a full backswing and followthrough.

If you’re curious about who some of the most well-known volleyers are, we got you covered. John McEnroe, Stefan Edberg, and Leander Paes are a few of the best-known volleyers to date.

Tennis is one of the most popular sports out there, but it is also one of the most difficult and demanding ones. Tennis players are known for leaving their hearts and souls on the court, and that is why understanding how much training and dedication is required to become a well-known player is important. This training includes learning and mastering the tennis strokes that can be a perfect advantage if executed correctly.

Although we have listed and explained some of the most important tennis strokes that exist, there is so much more to discover and come to learn and love about the tennis world. If you want to know more, including learning who the top 20 tennis players of all time are and why we can provide you with all the info!