Home News Kyrgios Cheeky Digs at Critics After Tickets for His Match With Djokovic... 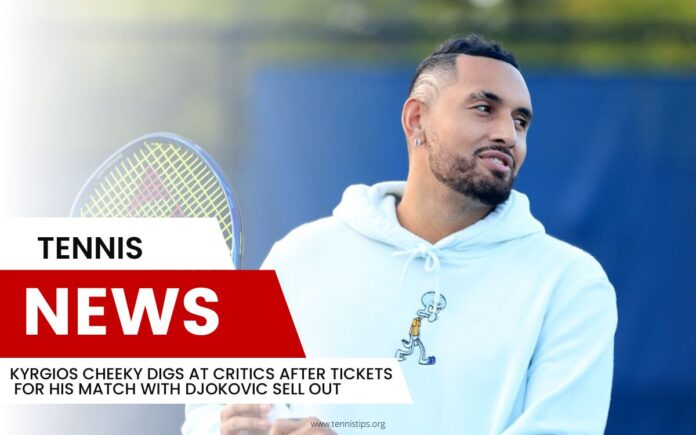 Nick Kyrgios has taken a cheeky swipe at his critics after it emerged a pre-Australian Open exhibition match featuring the Australian star and Novak Djokovic had sold out in less than an hour.

Kyrgios will take on Djokovic on Friday in an exhibition match at Rod Laver Arena. These tickets were hot property and got sold out very quickly.

After this happened, Kyrgios had a dig at any critics that believe he’s unhealthy tennis image tweeting the following: “Wow, Nick Kyrgios is bad for the sport! Wow, what a disgrace, a national embarrassment! How dare he sell out another stadium, the arrogance.”

This match is a replay of last year’s Wimbledon final when Djokovic managed to defeat Kyrgios in four sets. This exhibition will also give Kyrgios a much-needed run-out ahead of his home grand slam, the Australian Open, as he has been sidelined with an ankle injury.