Pickleball is a sport hugely inspired by badminton that recorded increased popularity over the last couple of decades. It is a game that consists of two to four players, and it requires a specific type of court with precise dimensions.

The understanding of court dimensions is essential for understanding the rules of this sport. It consists of rectangular areas that are divided with various lines, sectioning them off into different parts.

The sport can be played both indoor and outdoor, and the courts are similar to ones used in badminton. Today, we will discuss the size of the court, the areas that need to be marked, and the brief history of the sport. The size we are going to discuss is recommended by the United States of America Pickleball Association.

A Brief History of Pickleball

One of the interesting things regarding this sport is that it was founded as a product of improvisation. Back in 1965, Washington State Congressman Joel Pritchard and his business executive Bill Bell found themselves on the decrepit badminton court that Pritchard owned with no equipment to play. They decided to get the ping pong paddles a Wiffle ball, lowered the net on the court, and thus, pickleball was born.

Two years later, the first official pickleball court was built on Pritchard’s property, and a couple of years after that, the organization was built to protect the sport. Ever since then, the sport marked increasing popularity, and by 1990, citizens of 50 countries enjoyed it. Nowadays, the national championships are hosted, and the game of pickleball is internationally famous. As we already mentioned, pickleball is largely inspired by badminton, and thus its court dimensions have the same size as a doubles badminton court. The exact dimensions are 20 x 44 feet, and unlike tennis, pickleball uses the same dimensions for both singles and doubles games.

The court is divided into three zones. The first one is a non-volley zone, the space from the non-volley line which is located 7 feet away from the net. This area is commonly known and referred to as “Kitchen.”

The second and third zone consists of left and right service areas. They are located on the left and right sides of the court behind the non-volley line, and they are 10 x 15 feet.

Since pickleball is very similar to pre-existing sports, its courts can also be constructed from the tennis and badminton courts. Each half of the court is identical, and it is divided by a pickleball net that is 36 inches high at the furthest sidelines and drops to 34 inches in the middle. The overall net size is 20 x 3 feet, although it does lose height in the middle. In addition, sidelines, baselines, and centerlines visibly divide the court into three main sections on each half. 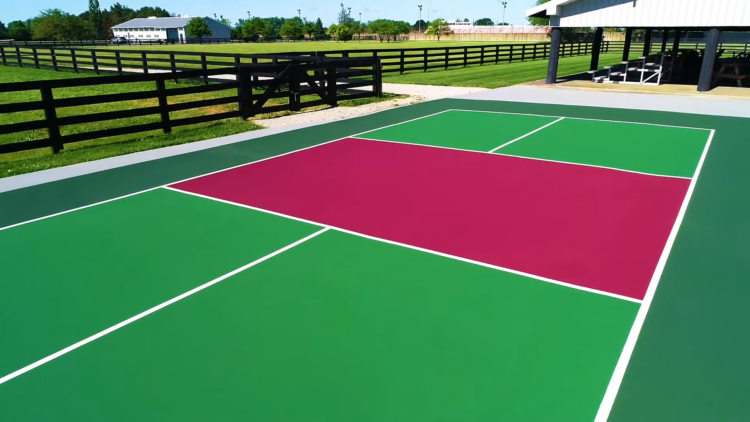 Pro pickleball courts are covered with AcrylotexPB, which is a surface product applied by a contractor. One of the cool things about this sport is that you can make the courts by yourself using a ¾ -inch nap roller, which can be applied without the help of professionals.

The United States of America Pickleball Association recommends using PicklePave cover coming from California Sports Surfaces. This is a textured acrylic cover made from asphalt and concrete, and it is very similar to AcrylotexPB.

Essentially, pickleball courts use a cover almost identical to those used for outdoor basketball and tennis courts. Textured with non-aggressive silica, these courts are non-slippery and very convenient for all types of outdoor sports. The lines that mark pickleball courts are colored white to contrast with the court color and are 2 inches wide. Same as the tennis rules indicate, whenever the ball lands at least partially on the line, it is considered in.

As we already mentioned, the court dimensions are 20 x 44 feet, so the measurements are inclusive of lines, so their 2-inch width is included. The court consists of two baselines parallel to the net, while the sidelines stand upright to the net on each side of the court. The non-volley line is located 7 feet from the net on both sides of the court, while the centerline lies on each side and divides the area between the non-volley line and the baseline. 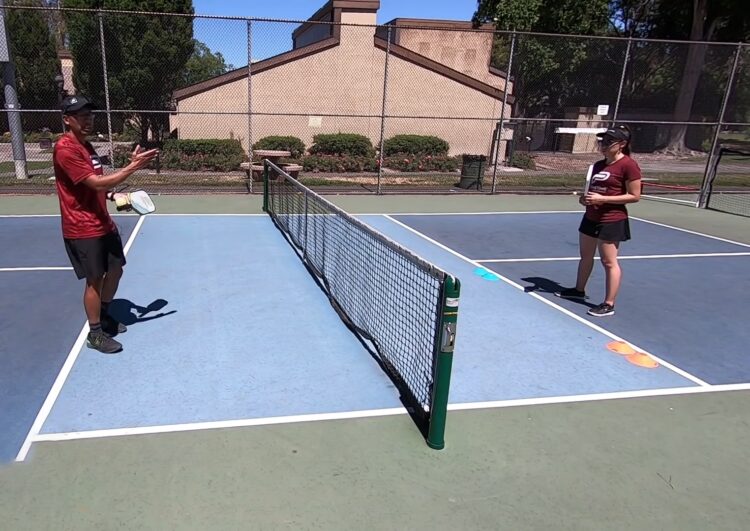 The net for the pickleball court is made of mesh and is 20 feet long. The mesh size should be small enough so the ball cannot go through the net. As USAPA standards state, the height of the net should be 36 inches high at the furthest sidelines, and the height declines towards the middle, where it is at 34 inches.

The net is equipped with a center strap that can be adjusted, and it should be located in the middle of the net, stabilizing it and preventing sagging. As far as the net posts go, they should be located around 12 inches past the sidelines, and the net attaches directly to them via cord or cable.

Outdoor courts are slightly different and have some extra factors to consider. One thing that is really important is the court orientation so the players can avoid looking directly into the sun. Since the sun moves from east to west throughout the day, you should use north-south court orientation to ensure that the sun is not always in both players’ eyes.

When it comes to outdoor courts, fencing is essential since it helps you to contain the ball in the playing area. Last but not least, windbreaks should be attached to fencing, which will reduce the effect of the wind on the ball.

Whether you are playing this fun sport at a dedicated pickleball facility, gym, outdoor, or DIY court, the dimensions should always be the same and compatible with USAPA standards. It is a great hobby and exercise for families and friends, and the equipment is affordable for most people.

We hope our article will grant you enough information regarding pickleball court dimensions. Each court uses these specs to keep the game fair and consistent, so keep them in mind because perhaps, one day, you might construct your own and have lots of fun doing it. 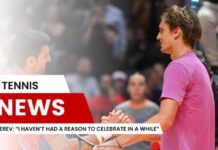 Zverev: “I Haven’t Had a Reason to Celebrate in a While” 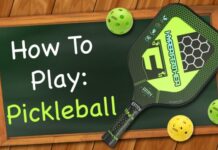